"It's Anything But a Regular Show, Must Be Original"

Originular Show (Also known as "Original Regular Show") is an American animated Internet series that first debuted on August 14, 2014 with three "Regular Style" episodes and premiered on October 23, 2014 with a very first episode on Dillony Gamehouse Network in the United States.[1] The first episode was released on WMBestovious1439 as a 11-minute prologue on April 16, 2014.[2] This series is created by Jarrone Preston-Gurray "J.P.G" Quaintel from the Dillony Gamehouse Network Production Studios. This series is an official parody of "Regular Show",[3] "The Mordecai Show",[4] and also "Sanjay and Craig".[5] The show's birthdate is on September 6, 2014. Originular Show never ends and have no conclusions due to popularity based on the number of unlimited episodes for the future of YouTube. The series has been watched by over 23,000 people for the past 5 years since its debut.

On September 6, 2015, Dillony Gamehouse's Adventure celebrates the "Originular Show" series' birthday party, with new birthday bumpers and the season premiere of the series.[6] On June 30, 2019, It was officially announced that the celebration block will return with the episode special "Gartails' Original Regular Birthday".

In the series, it was the year 1998, which is actually 2014 in the real world. This series is about an immortal 21-year old hybrid Red Margaretta named Benson Nathan Alexander von StevenFellsmore XIV nicknamed "Bloanjay" who does all the rocking and mature activities like street performing, being a band rocker and the Chief Leader of his new club called "The Red Shadowing." His club is in Shadow Muins Plaza in the town of Regular City.

Two Baltimores residents named Ghiff and Ghostavo - they always slack off to much. The other two are enemies named Cholony and Dall - they fight each other for no reason. Sharquetta is the #1 best witch in the 1990s - She does all the legendary things and discover the Baltimors kids about Mordecai Regularr from Ancient Woodfall. Later after that, Bloanjay and Ghostavo are now "colflings" in episode 2 (fourth episode overall) like in Regular Show. However, in the anternative universe, Bloanjay and Gartails are now best friends forever after Ghostavo saved his life. As of Season 3, Ghiff and Ghostavo are no longer secondary stars for the rest of the show. Bloanjay is now an official star of the entire series and appears in every episode and season.

According to the Dillony Gamehouse's Adventure Board of Broadcasting, Margaret Smith explained to JPG Quaintel that Gartails is expected to return to this series after the Halloween special. As a result, Bloanjay and Gartails will continue being best friends and Ghostavo will still be a club member of The Red Shadowing in the altered past. Originular Show was scheduled to reach more than 30 years in the future with the unlimited production of episodes and seasons. The series is considered as "Baltimore's favorite Internet show in Maryland".

The series has renewed for a third season on July 23, 2016, and it premiered on January 19, 2017. On November 25, 2018, JPG Quaintel confirms that the animated Internet film is in development, featuring all the DGN shows from the YouTube channel. On November 29, 2018, Originular Show is launching the new format in 2020, prior to the show's 7 years of the official series premiere.[7]

Popular Culture in the seriesEdit

According to the Regular Show Stermal Company, the series on Cartoon Network updated the title screen after 4 years in 2010 with a subtitle in season 6 and it's rebranded as "Regular Show: A Cartoon Network Original" as Originular Show's new popular culture as the stermal company's agreement stated that the world may upgrade to a hybrid. That means Originular Show and Regular Show are "spoof brothers" and they're members of the Popular Show family. After season 7 started airing, the "A CARTOON NETWORK ORIGINAL" subtitle was taken off the Regular Show title screens, then was restored in each other episodes and stayed permanently for the rest of the series like "We Bare Bears". Unlike Regular Show, Originular Show has a subtitle also since March 24, 2016. However, the stermal company was permanently closed on December 30, 2016 due to the show ended on January 16, 2017. Originular Show surpassed the series finale of Regular Show after premiered the series' first legendary episode "Sharquetta's Original Regular Ancient Adventure".

However, in Mopeois City, the subtitle is forbidden on the title screen. This series has two co-stermals (Mighty Magiswords & Rick and Morty overall) to participate in the competition called BOTAS (Battle of the Animated Shows) against Regular Show and other television shows. However, Henry Danger was eliminated from the series' team due to severe interferences with the stermal, and was replaced by Game Shakers. However, the other stermal company called the Rick and Morty Stermals Department, has jointed the OSSCS on  on January 23, 2017. Regular Show has two prestermals as well (Mopeois City & Sanjay and Craig) in order to become a parody spoof brother with Originular Show.

In 2016, BOTAS will have a "Margaret's Diary" stermal on September 8, 2016 to become a parody spoof mother (Obviously it premiered earlier in the year before the day of the stermal). Sanjay and Craig has ended on July 29, 2016 because Nickelodeon was unable to keep the series due to 120 episodes. After Regular Show ended with its final season, Originular Show continues to air for the next 35 years. This will be the world's longest running series to surpass The Simpsons and Regular Show.

The Department of Phineas and Ferb Stermals Incorporated opened their first two stermals called "Chowder" and "The Marvelous Misadventures of Flapjack", which they've been combined as "Chowder and Flapjack". They recently opened the modern stermals ("Regular Show", "Originular Show", "Sanjay and Craig" and "Rick and Morty"). However, "Harvey Beaks" is their final stermal to be opened before the closing of the department. 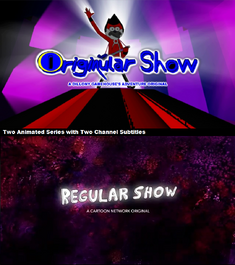 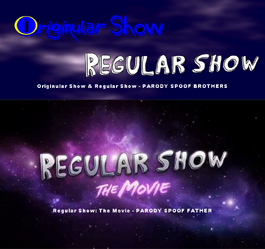 Regular Show Stermal Family
Add a photo to this gallery

Retrieved from "https://originular-show.fandom.com/wiki/Originular_Show?oldid=5003"
Community content is available under CC-BY-SA unless otherwise noted.